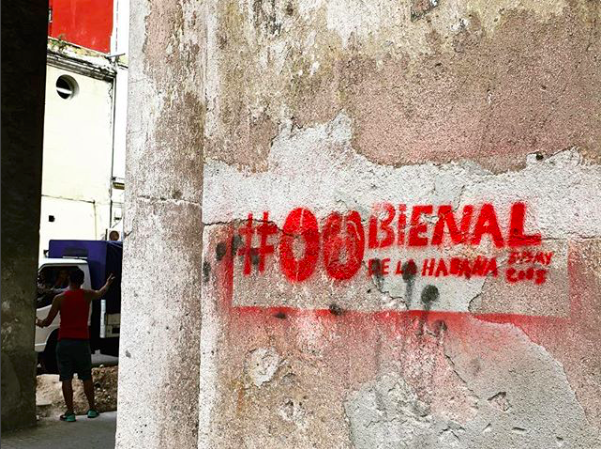 Havana #00Biennial: Aldeide Delgado in conversation with Yanelys Núñez and Luis Manuel Otero
Beyond the Political: The Human, Love and Creation

Recognized as the most significant event of the visual arts in Cuba, the reactions to the cancellation of the 13th Havana Biennial due to the effects of hurricane Irma on Cuban cultural institutions did not wait. Artist Luis Manuel Otero and art historian Yanelys Núñez decided to make an alternative Havana #00Biennial taking place between May 5th and 15th of 2018.

Aldeide Delgado: How did the idea of making the Havana #00Biennial come about? Were there similar reactions from other artists before the cancellation of the Havana Biennial?

Yanelys Núñez & Luis Manuel Otero: The #00Biennial was born at the moment in which the Cuban cultural authorities made public the suspension of the 30th official Biennial. The news circulated on social networks – a place where a great debate was also generated – and independent spaces of Havana. Several questions arose, such as a) why had they not consulted the artists before making a decision, and b) until when will the Cuban authorities continue to mediate and make negative decisions out of its own free will, interfering in the immediate future of its citizens. Out of the many proposals that surfaced, as a result, one of them was to carry out the biennial independently from the State. We embraced this option and stepped forward to command it. 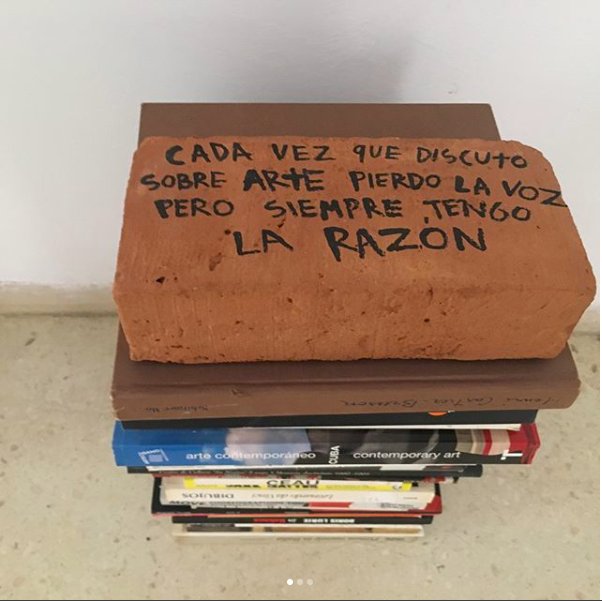 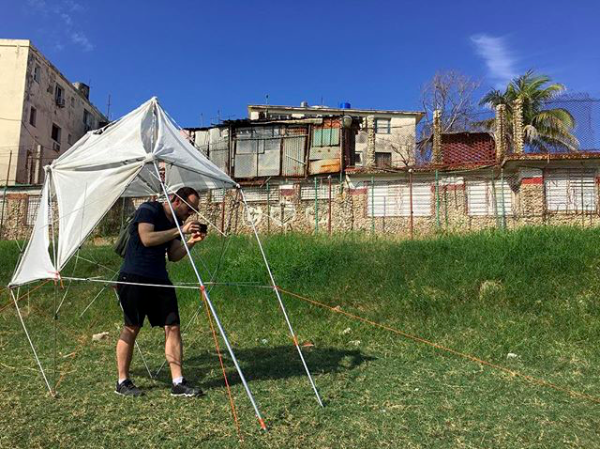 AD: To what extent is the #00Biennial proposed as an alternative biennial?

YN & LMO: At first the #00Biennial emerged as a gesture where we tried to draw attention to several points, one of them was about personal initiative and how it could co-exist with the institution-State in Cuba’s immediate future without negativity, “ghosts” or paranoia. For this reason, in our initial call, as well as in all published material, we have encouraged the official institutions to collaborate with the event, while urging independent ones to take advantage of the opportunity to “go out on the street”, in the midst of an international visibility network.

Yet another point of interest for us was to be able to call the event “biennial”. The reasoning behind this option was that we did not want to start an independent project with possible transcendence in time, or thought with multiple editions. We attempted to make a gesture that observed the problems of national and international culture, and the biennial denomination allowed it.

The #00 was the characteristic that set us apart from the traditional conception of a biennial, and this was part of our intentionality. We were interested in talking about the need for a renaissance of Cuban culture and that was meant to be transmitted before consummating any work or statement. We chose to transmit this through the title of the event.

Many people considered that we should not use the name “biennial”. We were encouraged by such to provide what they termed an “alternative experience”, but we preferred to appropriate all the imaginary and symbolic aspects behind this type of curatorial practice, in order to discuss its possibilities, and its potential as an institutionalized event. 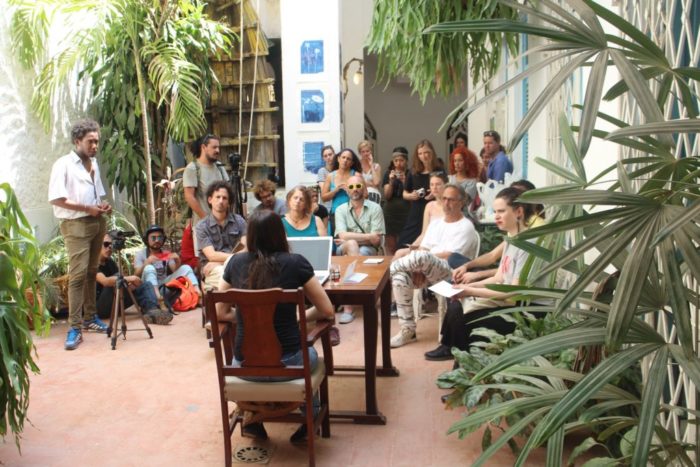 AD: How has the process been, as far as its reception from cultural-political institutions?

YN & LMO: From the first moment that the initiative was raised in social networks, the UNEAC [Union of Writers and Artists of Cuba] published a statement on its official page saying that it supported the decision not to hold the 13th Havana Biennial, but also, that unscrupulous people were encouraging others to take another position. The statement, of course, referred to us, and anyone who on Facebook commented about the indefinite suspension of the biennial or that supported the realization of an alternative event. With the passage of time, we have come to find out that the Ministry of Culture has met with Cuban gallery owners ordering them not to participate in anything related to the #00Biennial.

AD: How is the #00Biennial organized and what is its curatorial proposal?

YN & LMO: The organization of #00BH has been one of extreme improvisation and insecurities. Many artists and independent spaces with a long work on the island, when they heard of the idea supported us, but along the way they have been leaving. Others from the beginning have overcome all kinds of fear, paranoia and pressure—to which this event is subject—, and have continued to collaborate even in the face of large areas of uncertainty such as the economic one,—an event like this, no matter how small it may be, it consumes money. For example, to access communications we need resources—telephony, internet—, it has a high cost in Cuba, and that is only one part.

When we came up with the idea of doing the #00Biennial, we thought we would make a small event to be based on the collaboration between friends and colleague designers, producers, artists, and computer experts. The intention was to organize the biennial in several study-spaces (those that were available and those willing). But as we ventured to move forward, a critical moment added an unexpected twist: Luis Manuel was caught by the police for an alleged common crime, and as a result of this, the event grew to such magnitude and reached such media visibility—receiving innumerable signs of solidarity—that we had to rethink the whole strategy.

As a result of this turn of events, we began to work with professional designers, and decided to start an online campaign for fundraising. It is also important to highlight that in the middle of this organizational process there is an important level of uncertainty, which has its roots in the possible intervention of the Cuban police at each of the exhibits or open studio spaces. And that is something that we keep in mind, although we do not fear it. If the event manages to take place from May 5th to the 15th, it is because the Cuban government allows it. 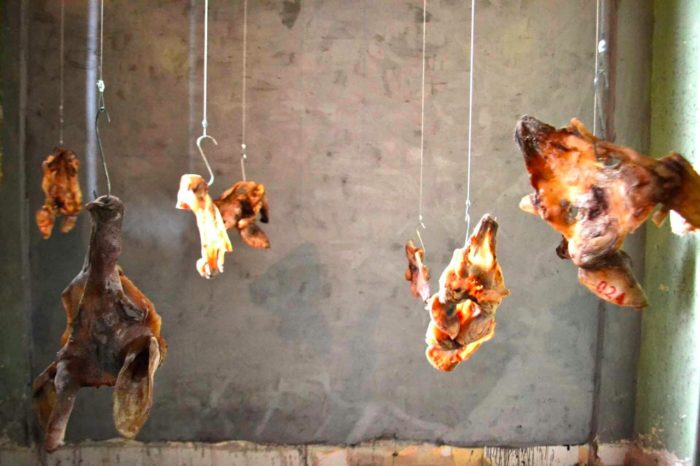 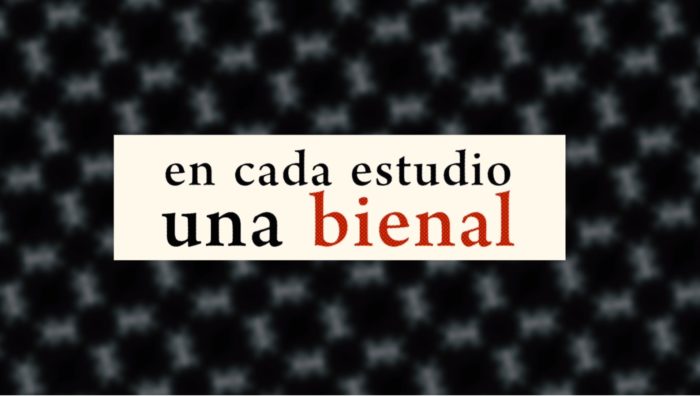 The Havana #00Biennial has independent spaces as a platform. Understand “independent space” as any study or artist workshop, alternative institution, or cultural initiative—online or physical format—with years of work, or simply created specifically for the #00Biennial event.

Starting from this platform, and without a theme that governs the event, the general curatorship took on all the proposals that artistically adapted to the imperatives of the call. Also, respecting the aesthetic conceptions of the group that organizes it, as well as the real possibilities that we have to produce one type of work or another. By not having space availability, with the added burden of everything being so unstable, we proposed that the artists send us works that were realizable in the reality of the event, and of Cuba.

We conceived the slogan, “In each studio, a biennial”, as an inclusion space. At such spaces, in some cases, domestic, curatorial projects would be created after receiving all the proposals.

LMO: The #00Biennial has been especially an event of personal growth for me, since as a young artist you have as references the successful artists, with a work legitimized by the art world and especially the institutional one. But as we began the organization of the event, and went out to search for, or open dissimilar spaces [1], we have found countless excellent artists with very contemporary proposals, something that has allowed us to receive the purest extract of the artistic realization.

In this way, we have found a variety of unexpected languages within traditional formats, such as painting, that are not exposed in institutional spaces, because their managers do not know the sophisticated mechanisms of insertion in the art world, or maybe because the piece is too eccentric or is made of unsophisticated materials for contemporary Cuban art.

These artists do not have a personal space or studio because they are underestimated—since they do not represent images of success within the world, sometimes cynical and hypocritical of art—but they live happily in a universe of perennial creation, becoming the basis of all the “super art stars”.

We are carrying out an inclusive event. Beyond “the political”, we speak of the human, of love and creation. 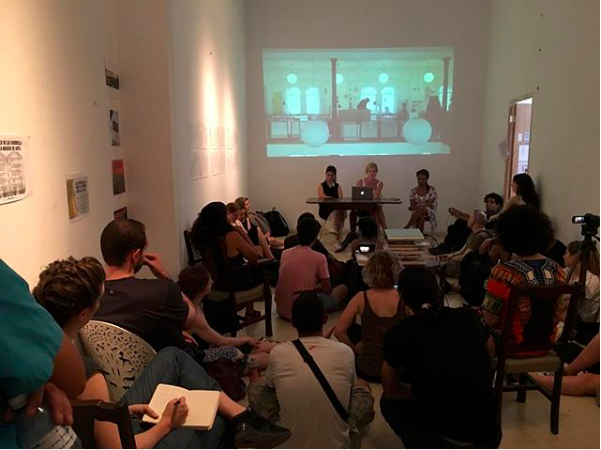 AD: What relationship does the #00Biennial have with the Havana Biennial? Will they coexist? Will there be more editions?

YN & LMO: The #00Biennial assumes all the positive aspects that the prestigious Havana Biennial has given to the art world and to Cuba. The art moving in the streets, breathing with the people, coming out of the white cube, is something we’re very attracted to. We also rescue the first ideas of the Biennial of making an event without resources, marked by solidarity that would make the practices of those marginalized by the West visible.

Its organizers do not intend to go forward with other editions, but nobody knows. We will see how this first experiment works, how it is received by the people, by the artists.

AD: Which artists will participate and with what projects?

YN & LMO: We have 30 foreign artists confirmed, but since some of them are going to come to Cuba we cannot name them. On the Cuban side, we have more than 40 artists, and we will be revealing their names gradually.

Some of them are:

A project that we would like to talk about is the one that is going to be organized in Alamar, where Amaury Pacheco and Iris Ruiz are the main coordinators. Entitled “El Bloque del Este”, this project, which is scheduled for a day inside the #00Biennial will contain a festival of sand sculptures, visual arts, photography, installation, audiovisuals and performers. It will include an alternative show of hip-hop and electronic music, as well as spoken poetry. Also, based on the slogan assumed by the #00Biennial, In each studio, a biennial, a group of Cuban artists living in Miami have come together to carry out an intervention from May 11th  to 15th  at the MUD Foundation. MUD is a space dedicated to the creation of educational and artistic projects that focus on the relations between art, internet, virtual reality and data analysis.