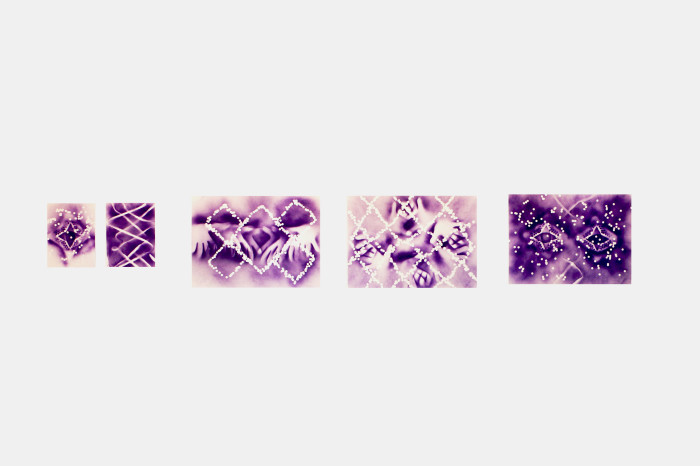 Natalia Valencia: Can you elaborate on your approach to your current subject of research: the vast universe of Amazigh (Berber) textile techniques from the Middle Atlas in Morocco and how you relate it to your earlier research on techniques from Oaxaca in Mexico? How do you grant meaning to this transposition of interests across territories and what are the common axes from which you develop a body of work that is inscribed in a contemporary art discourse?

Aurora Pellizzi: I come from Mexico, where the culture of craftsmanship is still part of daily life. Individuals and communities produce objects from raw, industrial, or re-purposed materials – manipulating them from conception to finish – applying endless decisions to endless variables throughout the process. My research in Oaxaca has stemmed from an already established familiarity with craft and textile practices in Mexico, but in recent years I have had the opportunity to live and work with weavers from different communities there – refining my understanding of particular aspects of their weaving or dyeing process.

This past month, researching Amazigh weaving traditions in Morocco, I have been struck by how, as in many parts of Mexico, weaving subsists as a rich, varied, and ongoing practice. In both cultures weaving extends beyond the mere manufacturing of functional objects. It represents a structure through which individuals and communities construct complex systems of ritual, memory, symbology, and belief. I am interested in these forms of textile because of their ability to inhabit a liminal space between surface and structure, image and object, painting and sculpture – between the functional and the ritual object – the banal, the ancestral, and the prophetic. 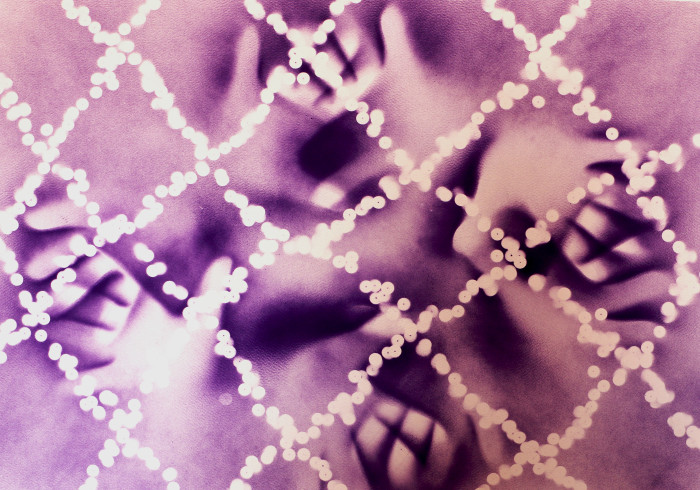 Aurora Pellizzi, Diamonds Are Forever I, 2015, acrylic on watercolor paper. Image courtesy of the artist.

From concept and structure to process and form – weaving is a visual, semantic, haptic and conceptual framework – webbing image, thought, texture, and form into relics from the past, present, and future. I perceive these woven objects almost as mummified relics of ancient systems of knowledge, emblematic symbols of the advent of modernity and the industrial revolution, while simultaneously mirroring the pixelated images on our screens through which we witness our contemporary surroundings and the divination of things to come.

NV: Tapestries can tell stories encoded in various sign systems, thus having the power to appear “only decorative” to an inadvertent eye, while maybe conveying subversive messages. How do you treat this particularity of the media in your work? 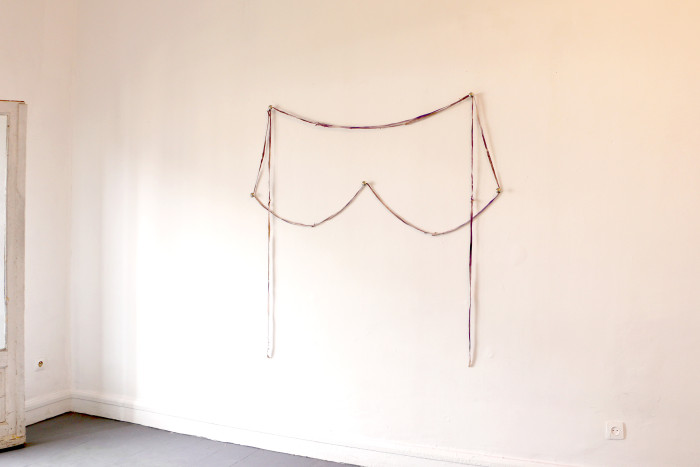 AP: Textile practices have long been discredited in Western Fine Arts, first perhaps for their association with women’s practice and second for their association to non-Western so-called “primitive” cultures. While these distinctions are now happily dissolving and there is a surging interest in textile practices today, I think suspicion remains of things made by women from “alien” cultures. There is an ongoing attempt to categorize these objects separately and as inferior to other artistic forms. The term ‘decorative’ is often used to convey a value judgment to non-European and non-male art practices as not only different but inferior (1).

In Amazigh culture, weaving is primordially a female practice. Men are discouraged from participating in any part of the process owing to a succession of ‘curses’ believed to afflict them if they do. In a sense, then, women are empowered by the practice of weaving. The female community dominates a sort of monopoly over its knowledge and practice. This gives them a certain free reign to express complex feelings and concepts that might otherwise be censured or repressed in their culture. Interestingly, lozenges are one of the most prevalent motifs in Amazigh carpets. They are thought to express explicit sexual content relating to virginity, sexual experience, and birthing (2).

When it comes to image making, weaving imposes a necessary system of abstraction – the weaver works within a mathematical grid or binary format to either follow or break a specific pattern or motif. These patterns and motifs tend to fluctuate ambiguously between figurative elements and abstract geometrical compositions, and permit several simultaneous levels of meaning to coexist.

While specific Amazigh motifs might be identifiable to a knowledgeable fellow weaver, they do not have fixed meanings. The ‘terms’ or ‘motifs’ are abstracted, repeated, and distorted. They are conceived independently and simultaneously in relationship to the whole composition. Similarly to the way in which a poem takes shape – meaning is developed through repetition and rhythm – the particular and the whole – coming together in complex compositions that develop and change over time.

NV: What is your relationship to the specific temporalities implied in the traditional production of textile pieces? This mode of production is related to other temporal logics that are detached from contemporary accelerated modes of consumption. Thus they constitute a very particular universe. How do you mediate as an artist between these divergent conceptions of time?

AP: Hand weaving and dyeing are indeed slow and laborious processes. They contain separate phases, and each imposes its own rhythms and durations. The amount of time, resources, effort, and dexterity involved in completing a textile from start to finish imply a unique level of commitment. Throughout the process, countless decisions must be made.

Certain variables in the process might be reduced depending on the functionality of a certain object or by a culturally determined framework of materials, colors, motifs, structures and techniques. In Amazigh weavings, the planning and structure of a process is predetermined to a degree, yet some room is left for improvisation – chance, error, inspiration, or a change of heart become active agents influencing the outcome of the piece. In a sense, the time and process of execution are incorporated as participants through the fluctuations and irregularities of the final composition. These weavings become vestiges of the time, experience, and process of the weaver as encapsulated in the 2-3 month period of production. 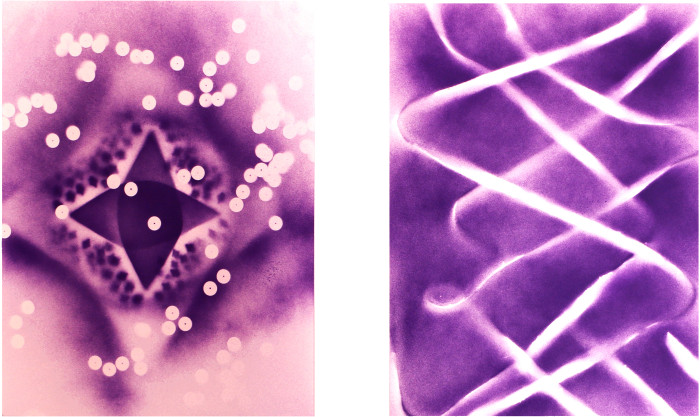 The Bauhaus movement was very wise in re-instating an interest in hand-weaving processes and including them in their academic curriculum. With the onset of industrialization, they realized that re-familiarizing the artist and designer with the practice of hand-weaving was essential for equipping him or her with the tools and knowledge necessary to resist the de-humanization of mass-production and the alienation of individuals from primary materials. Access to this knowledge was considered necessary for innovation and creativity, and for its potential to shape the fabric and structure of surfaces and objects in society (3).

Today, textile manufacturing has become not only de-humanizing but inhumane, as very cheap textiles are produced under atrocious labor circumstances in the poorest countries of the world. Mass consumer culture encourages the purchase and disposal of these objects at increasing rates. By contrast, hand-weaving and natural dyeing practices not only incorporate a certain ecological wisdom, they invest the maker with the knowledge of the transformative process and temporality from fiber to structure, material to image. While it isn’t viable for all production to be manual, the persistence of these processes should inform contemporary and future modes, formats, and temporalities of production. 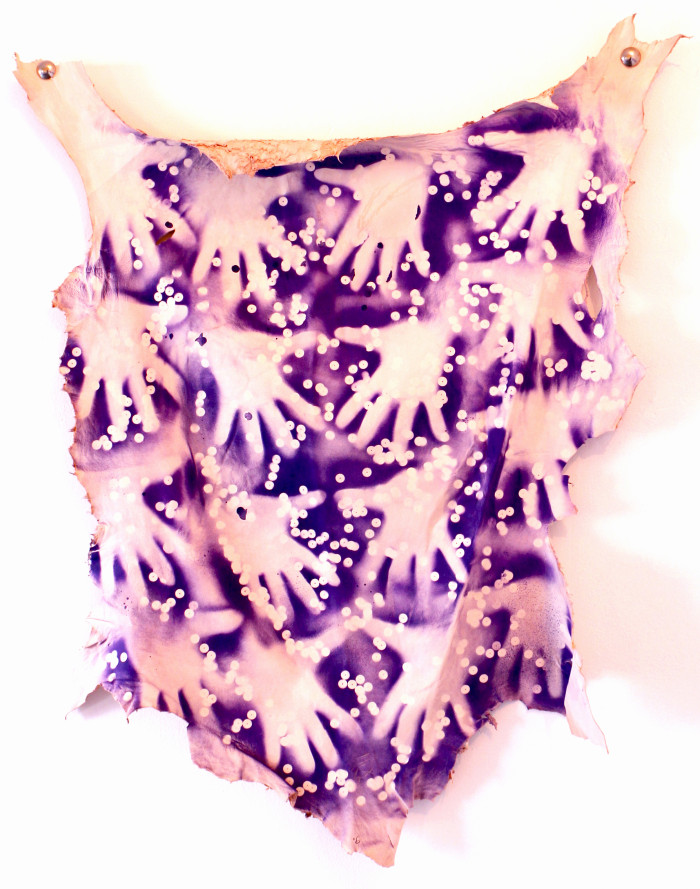 Aurora Pellizzi, Leathers, Skins and Pubes I, 2015, acrylic on leather. Image courtesy of the artist. 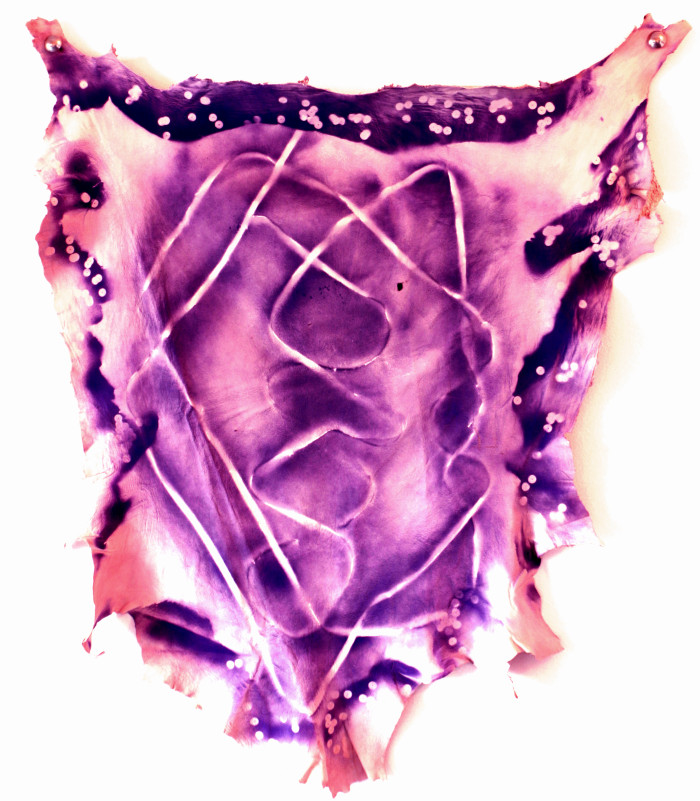 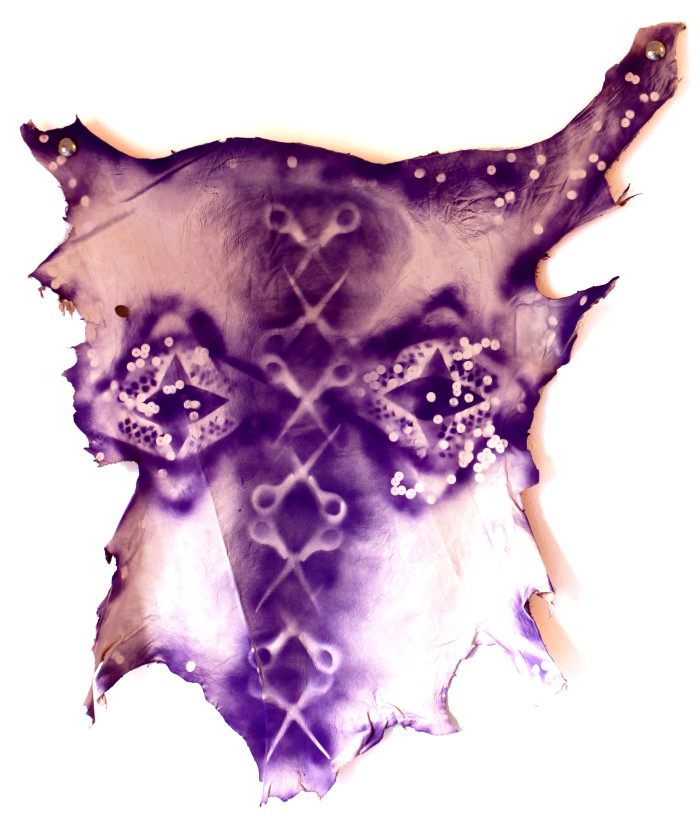 NV: In my mind, your pieces are imbued with esoteric or mystical meaning, as they are produced with traditional methods that were originally intended to, for example, produce “talismans”- for protective intentions, so as to “keep the evil eye away” or to tell the story of a family lineage, among others. As such, these contemporary art pieces are somehow inscribed in this legacy that builds an object as a unique, irreplaceable, concentrated bearer of meaning that is aesthetically instrumental as part of a greater ecology. What coherent future do you imagine for these artworks?

AP: Amazigh weavers often incorporate talismanic and prophylactic messages into their weavings. More than messages, these are active agents that continue to work on their own accord beyond the presence of the weaver and regardless of whether they are recognizable to the reader.

One recurring motif is the khamsa, which is the number 5 in Arabic. The number itself is thought to ward off evil – and the term is a metonymic designation of the five fingers of the hand – the eminent protection against the evil eye. But it also represents the hand of the weaver and maker. These abstract, figurative, and mystical meanings become a metaphor of the creative process and the artistic object itself as a transformative and active entity that is invested with a power and life of its own (4). 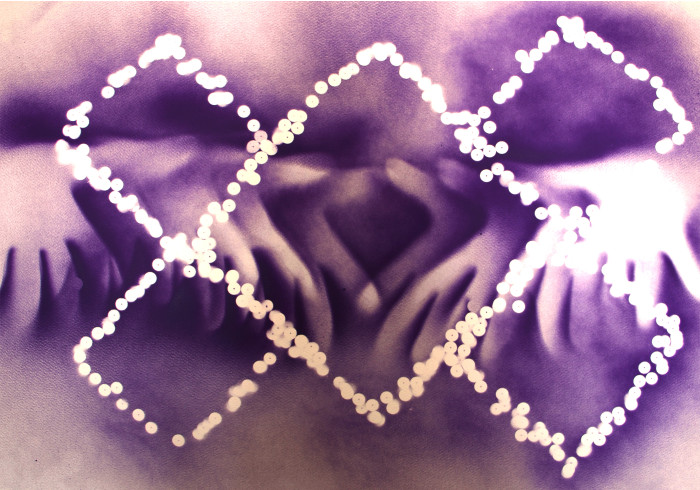 Similarly the preponderance of the lozenge motif can fluctuate between several meanings, at times representing the female vulva or the contractions of childbirth, while also containing associations to the third eye of the devil as conceived in Islam. Good and evil coexist in the same symbol. The visualization and expression of evil has the power to disarm evil itself, and acts as a kind of homeopathic remedy, providing protection against the un-seeable, intangible evil outside the carpet (5).

I share this belief in the power of images and objects to embody the unfathomable, and to act and communicate beyond the intentions and presence of the maker, independently of rational explication and with ever-changing interpretations and meaning. 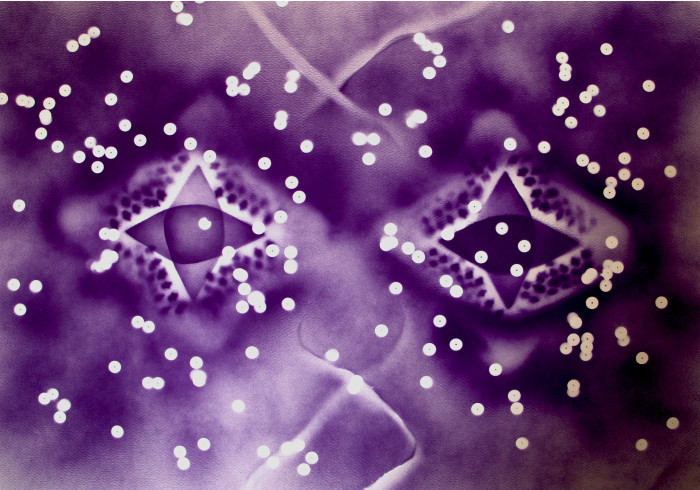 Aurora Pellizzi is an artist based between Colombia and Mexico. 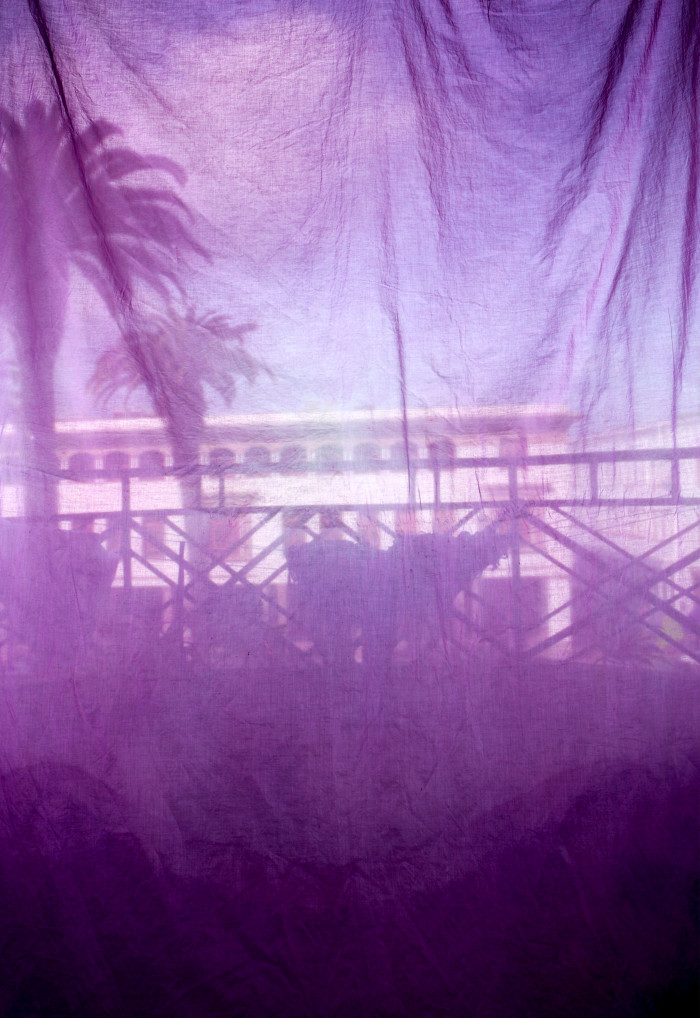 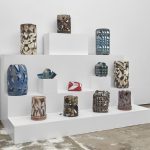 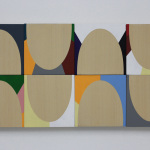 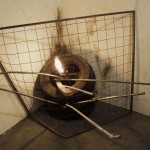