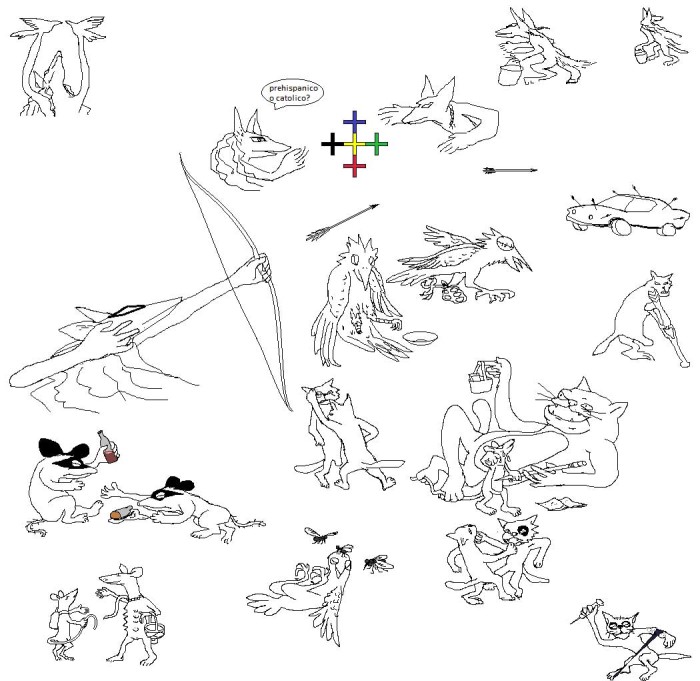 The Great Spirit is stuck in the middle of a traffic jam around Colonia Roma –he is on his way to see Iztaccihuatl “the white woman” mountain, outside Mexico City. Will he make it? Or will he go to “Gravedad”, the current art show at Casa del Lago in Chapultepec park? Does the show really have the spirit that Mexico deserves?

The Great Spirit is travelling by microbus. Will he pay the fare or will he get a free ride?

Coyote-Bianco: What does the name Chapultepec mean?

Huehuecoyotl: Chapultepec in Nahuatl means “hill of the grass hopper.” It’s interesting to note, however, that the naming of places by Nahuatl–speaking people is indistinctly an act of reverence. Names in Nahuatl are given based on a unique geographic, botanic, idiosyncratic and/or religious character of the land. Chapultepec’s true meaning therefore is lost in a mostly Spanish–speaking country.

In the olden days, the Chapultepec hill was entirely surrounded by water, it was a tiny island in the middle of lake Meztliapan or “Lake of the moon.” The lake used to occupy a surface larger than present day Mexico City. Today the remaining water at Chapultepec is but a foul soup of detritus and bacteria. Chapultepec is said to have been inhabited for at least 3000 years. The Mexica, founders of Mexico-Tenochtitlan–the ruins upon which present Mexico grew–were still homeless more than half a millennium ago and eventually were allowed by the Tepanecah–then owners of the hill–to inhabit the lake’s shores which were regarded as useless for agriculture. But, to the Mexica, this was a true gift, as the springs provided them with drinking water. Soon they began an incipient agriculture system and, once established at Mexico–Tenochtitlan under the rule of Moctezuma Ilhuicamina, the Mexica transformed Chapultepec into a botanical garden.

As we all know, the supremacy of the Mexica, better known today as Aztecs, was short lived. I personally lament this. With the arrival of Christianity, violence and money, the destruction of a way of life inexorably began –a destruction that still has no foreseeable end. The lake is long gone, replaced by an ever growing monster city swallowing water, land, people and hills, replacing it all with banks, drugs, corruption and violence. 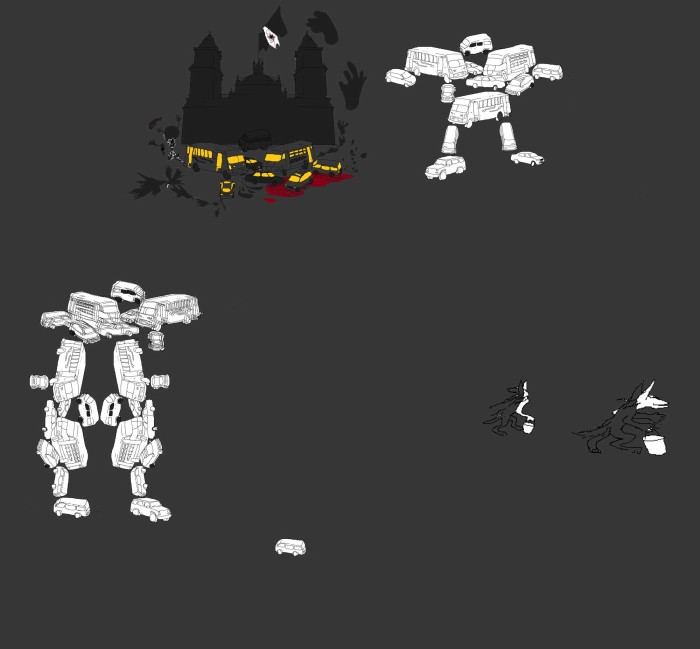 Coyote Bianco: Can you tell us about the Great Spirit, and what it means?

Huehuecoyotl: This is a Northern Native American concept that is born of the empathy of the Pre–Hispanic people with the world and the cosmos. Amongst the Sioux in the United States, it’s called Wakan Tanka, amongst the Aymara in Bolivia, it is called Wilaquta, however it’s important to stress that “Great Spirit” is not entirely an accurate translation. The late Lakota actor and activist Russell Means pointed out that it is more appropriate to call it “Great Mystery.”

Amongst the Mexica of ancient Mexico and current revivalists, it’s called Teotl, Ometeotl, Tlohque Nahuaque or Ipalnemohuani in Nahuatl. It is important to clarify that the word “Teotl” has been translated into Spanish as Dios, or God in English, but Teotl might be best understood as an “all embracing conscience,” present in every aspect of existence. It’s not reduced to matter and energy but embraces the interdependence of both. And it’s certainly not a concept that privileges humanity as separate from everything else. Tlohquenahuaque, for instance, may be understood as Tlohque and nahuaque: Tlohque, or what is near and, nahuaque, that which expands, meaning a concept in perennial transformation. Likewise, Teotl is identical with everything and everything is identical with Teotl. As such, the cosmos transcends such dichotomies as personal vs. impersonal, animate vs. inanimate and it is this eternal dynamic of movement, becoming and transmutation, that are essential attributes of Teotl. 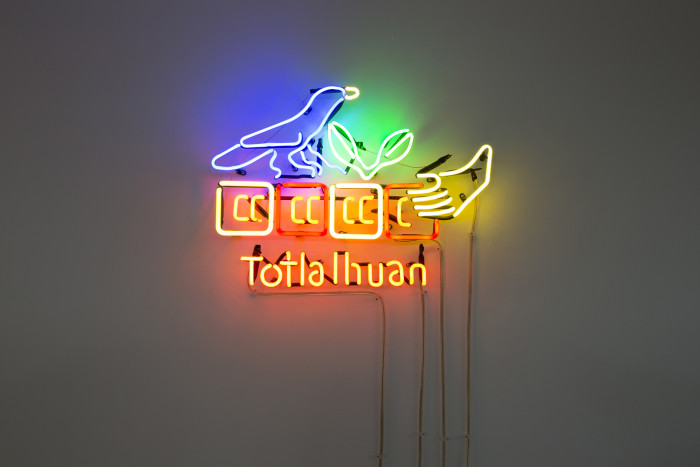 Coyote Bianco: How do we know if the Great Spirit likes ART? Can you tell me what the role of art is today?

Huehuecoyotl: I will attempt to answer both questions with an analogy. I think present society is like a microbus in today’s Mexico City. Running on a ridiculously outdated and inefficient system, people are crammed inside of a tin can, enduring loud music in silence and suffering the discourtesy of the driver who, many times, does not even know how to drive properly. The government runs the country like the bus driver, often times obliviously engaged in conversation with a lover, distracted by personal indulgence and contempt for its customers. In this scenario, Art is like the effort displayed by a number of helping hands aiding a decrepit system out of good heartedness –amidst this abyss of pollution, decadence, corruption and disaster.

If Art and artists are to have a conscious and active participation in present society, the effort, I believe, must come from a true empathy towards both nature and people. There is no landscape, no aspect of the world that has not been touched by humans’ so–called intelligence and technology, but for what end and to whose benefit? 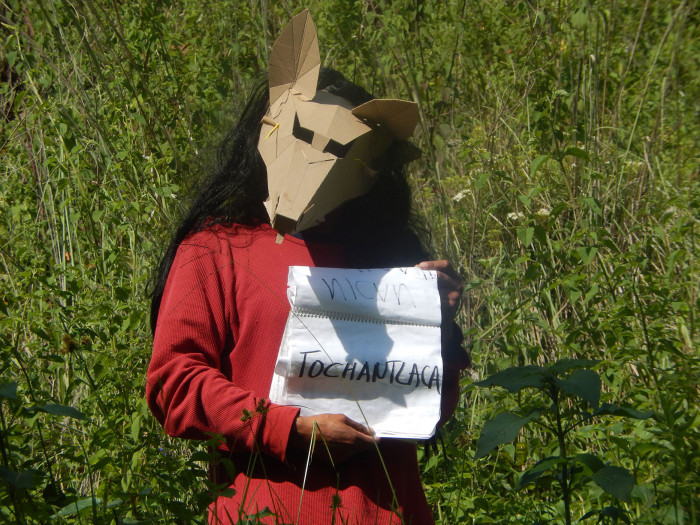 Coyote Bianco: Can you tell us about your work at “Casa del Lago”?

Huehuecoyotl: For the exhibition “Gravedad,” curated by Michel Blancsubé, I made a piece mostly composed of maize cornhusk, maize corn and cardboard, together with an animated, mechanical and electronic system, which may be appreciated as a Quetzalcoatl sculpture. The maize cornhusks come from the last “milpa” harvest my family and I did last year.

In ancient times and in the present resurgence of Prehispanic cosmogony, Quetzalcoatl is the god that travels to Mictlan or “land of death.” Quetzalcoatl travels there, defies and defeats Mictlantecuhtli, “Lord of the underworld and death” in order to retrieve the substance from which humans will be made: maize corn. For this reason maize corn is known by Indigenous people as Teonanacatl or “divine sustenance.”

My choice of materials is a reference to one of the most important struggles for survival humanity cannot afford to ignore today: healthy foods and healthy technology. In this sense, the piece is also a landscape, Quetzalcoat’s feathers are made of maize. The feathered serpent of ancient times has been beheaded but it is not dead.

Transistor technology has brought the world to the brink of destruction. The number of transistors in a dense integrated circuit doubles approximately every two years. It has been noted since the mid 1960’s that such a rate has a strict correlation to how “well” an economy is doing. In other words, the transistor is becoming infinitesimally smaller, so small it can no longer function properly. The Mexican government –like most governments in the world– still runs on the ludicrous premise that, if economic figures go up, all will be well, regardless of over 50% of the Mexican population earning less than 350 USD per year. If GM Maize corn is forced into Mexico’s agriculture, the economy figures will undoubtedly go up for corporations that own the crops, regardless of environmental stability, poverty and corruption. 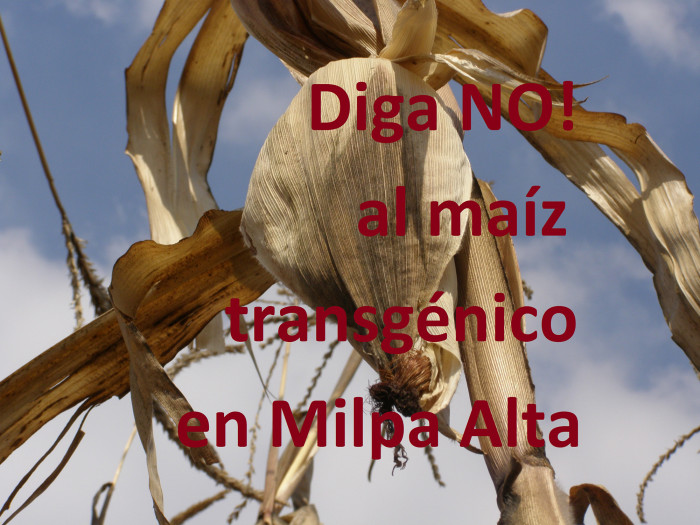 Coyote–Bianco: What is a political artist?

Huehuecoyotl: I do not believe art is the arena for political discourse. Artists in the past have attempted such ideas and the result has been an alliance with the discourse of a few fascists, or something similar. I do believe, however, that art’s ideal purpose is aspiring to free the imagination from the constrictions of social, political, environmental, or economic inertia that are driving us to self–destruction.

The microbus has moved a little, but is still stuck in traffic and, in a curious detour of the mind, now it stands right in the heart of Mexico City, the “Zocalo.” There are many soldiers, protestors are shouting, there are street vendors and an ice-skating rink conveniently placed by government officials to further obstruct the mobility of imagination.

Huehuecoyotl: I like the title of one of your pieces at the Gravedad exhibition, “The shops are closed.” what are you implying?

Coyote–Bianco: It’s a way of saying that there must be something else, other than shopping, in our culture. When there is no shopping its either nighttime or there’s a war. Furthermore, government controls people through consumerism, like remotes. 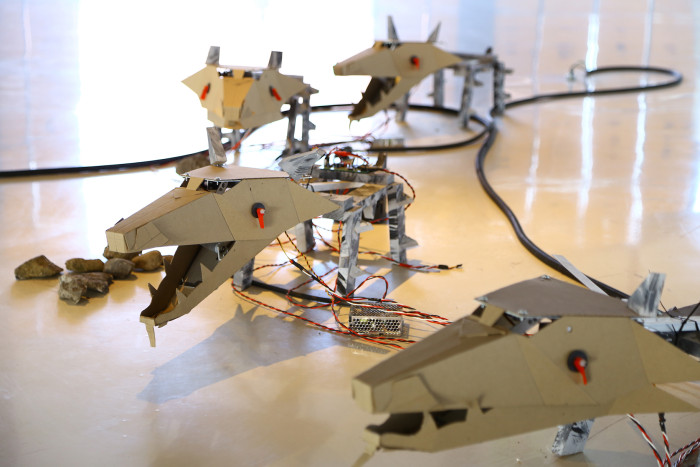 Huehuecoyotl: In your work you make use of electronic and mechanical technologies. What is mechatronic art?

Coyote–Bianco: It is a form of expression that I see as a link between high and low–tech, but for a piece to truly engage with people’s imagination, it must have a little of the Great Spirit in it.

Huehuecoyotl: The transistor is the building block of our day, what have been its implications for present society?

Coyote–Bianco: Amongst other functions, the transistor is able to amplify an electronic signal. More specifically, it conveniently converts a weak voltage into a larger, more usable one. Therefore, it must affect people mentally…

Huehuecoyotl: You often make allusions to drugs, money and guns in your work. Could you comment on these associations with the Mechatronic technology you use in your work?

Coyote–Bianco: I try and refer to violence as “machine culture,” in order to create a reflection in the public.

Huehuecoyotl: You were able to visit Milpa Alta, a small community outside Mexico City; what difference in life style did you see there? Do you think it will survive the relentless expansion of Mexico City?

Coyote–Bianco: I see Milpa Alta as a community whose culture and territory are far more exceptional than Mexico City. It is a community acknowledged as “Pueblos Originarios” (origin people), which means it holds onto values based on a relation to the land, sustenance and environmental health. Mexico City is just like any other city. 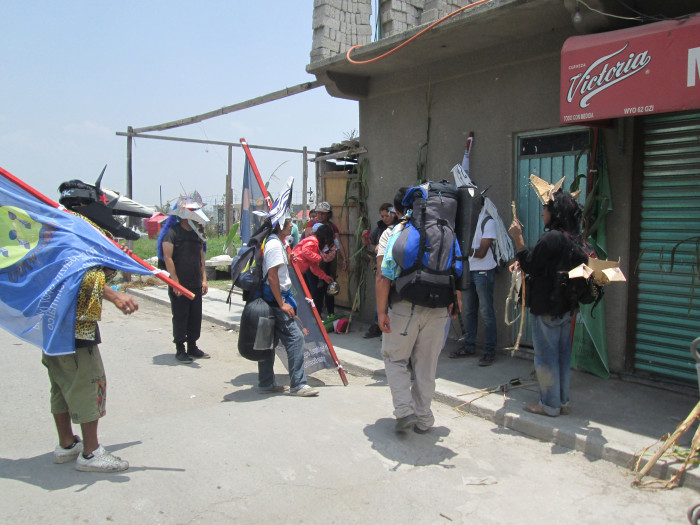 The two coyotes are making no sense. The conversation is discombobulated, but then again, rubbish by any name is waste and, by implication, any hindrance to the mind –billboards, political discourse, loud music and cars– inevitably jam imagination.

Meanwhile the Great Spirit, ever the mystery, has gone astray. He exits the bus to linger a little at Popocatepetl.

People of Milpa Alta know this time as the “Age of Movement,” “4–Ollin,” and it will end in earthquakes. 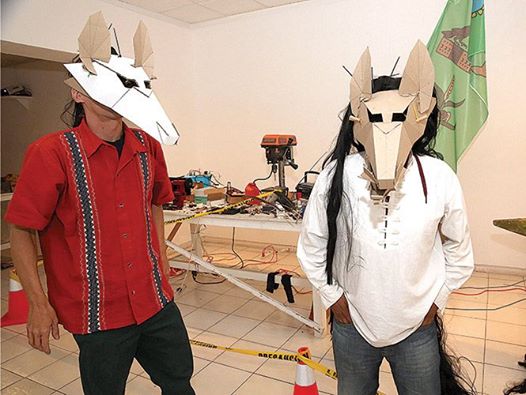 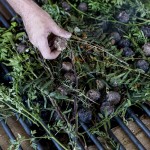 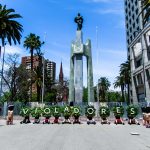