So far, 2015 has been a very busy year for Elena Damiani. Among some of her recent projects are the participation in the 56th edition of the Venice Biennale, followed by Testigos: un catálogo de fragmentos, a new installation commissioned by the MUAC in Mexico City. Working with vintage images appropriated from scientific books and digital databases, over the last decade Damiani has developed a solid practice that collides the past with the present in order to make visible the fractures that underlie historical processes and the formulation of representational systems which still act upon the present. In spite of involving a long process of quasi-archeological archive research and collage of photographic materials, her works inhabit a zone of indeterminacy where document and fiction are juxtaposed and different historical times are collapsed into a single project. Damiani was born in Lima, in 1979, where she studied Architecture for a while before moving to a BA in Fine Arts. In 2008, she relocated to London, where she completed an MA in Fine Arts in 2010. Currently based in Copenhagen, the artist was recovering from a cold in her hotel in NYC – where she was installing a new commission for the Americas Society building, when I interviewed her for Terremoto.

Kiki Mazzucchelli: Images of landscape are a recurring feature in your work since the beginning of your practice, through the appropriation of photographic and documental material related to cartography, geology, geography and other Earth sciences. Where does that interest stem from?

Elena Damiani: I guess my interest in landscape comes first of all from the place I’m from. It was something really familiar to me because of the kind of landscape that surrounded me where I grew up. I used to go for walks with my family in the outskirts of Lima. But it was actually a really nerdy activity, as we went out to these deserts or dry mountains to collect stones. Being a child, I felt that the stones I collected were real treasures, as they were found near ancient ruins. So I believe the idea of landscape was embedded in my memory as something valuable and this sort of recollection keeps reappearing. Only now I’ve come to realize how strongly these memories reverberate in my work, because at the beginning I couldn’t see any personal connection at all. I have a background in architecture and during that time I had a very clear interest in the relationship between natural and artificial construction and how the study of this relationship can help us understand society. I’ve always thought of my practice as a natural development of my architectural training, but now I’m much more aware of the impact that growing up in Lima and having very personal memories of landscape had on my practice. 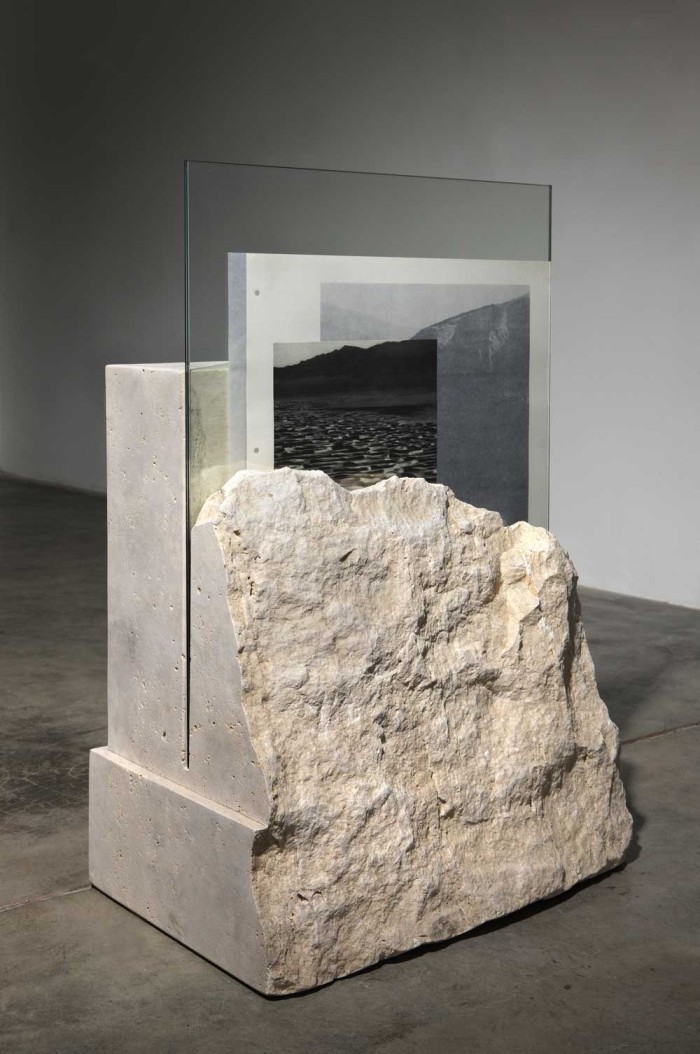 KM: When speaking about your work, you define it as a practice of collage. While in most of your early pieces, which are mainly two-dimensional, this process is very clear, your practice has shifted recently, taking a more sculptural or spatial dimension.

ED: Sculpture is something relatively new to me. I only started making sculpture in 2012, so it is something I’m still exploring. However, I still see my work as collage. The process that leads to a work or a series of works involves an almost archaeological research where I collect materials from old books found in flea markets, digital archives such as the US Geological Survey or the US Land Management Bureau that are then selected and reconfigured or juxtaposed in each work. Sometimes I spend hours sitting on the floor of a second-hand bookstore going though hundreds of old books that had lain forgotten for years. I also make videos, but only occasionally. To me, making videos is like doing your tax return. During my research for each project I have to collect a lot of material, so these images are then used to create a sort of storyboard for the videos, which mark the end of this research but are also a process of clearing the brain before I embark in the next project. The progression to a more sculptural approach was a natural development in my work and it follows the same logic that underpins earlier projects, although I am still experimenting with new materials. For instance, in the Macelos series, presented at the Mercosul Biennial in 2013, I knew I wanted to work with marble stones. I had diagrams for producing marble plinths with smooth finished surfaces, but changed completely the design of the sculptures while I was walking around the factory. I found in one of their workshops a series of travertine blocks that were in the process of being shaped like sinks and I thought they were already almost solved as sculptures. So far they had made the initial cuts and the blocks had incisions or slits made by the cutting blade, which runs vertically until a few centimeters close to the base. In the every day production line of the factory these cuts are made as marks for then breaking apart the blocks that will be worked into conventional sized sinks. Anyway, I decided to use those blocks without breaking them apart, leaving the slits made by the blade as vertical incisions where I could insert glass pieces with collages. I worked only one side of each block of travertine to make it resemble a split face stone and added some minor details referencing architectural elements, like the base of the sculptures. 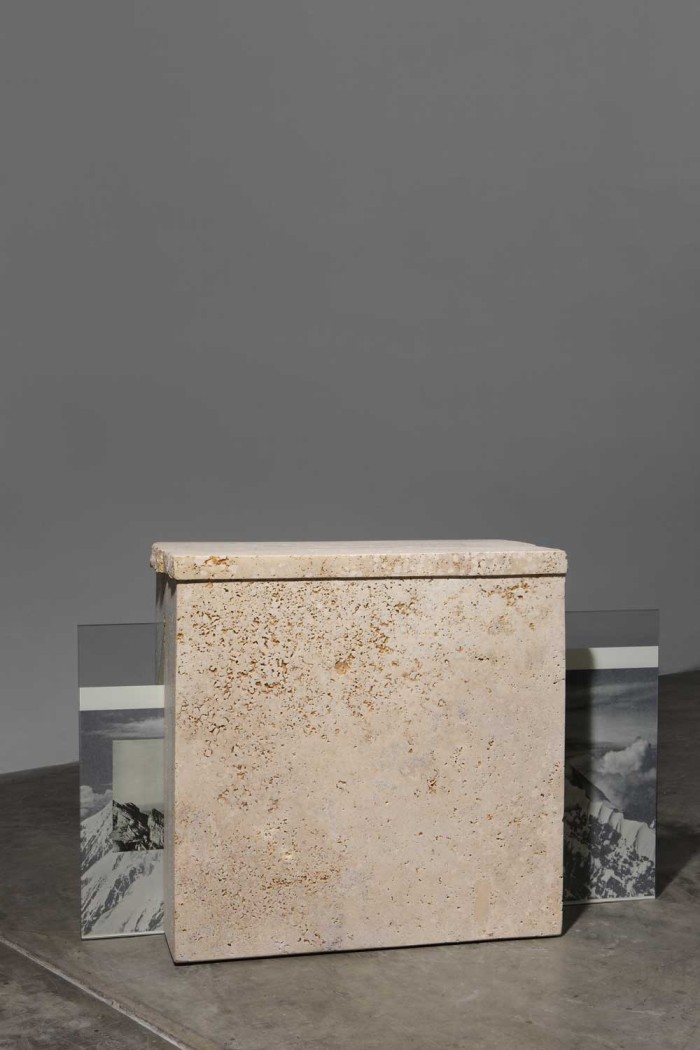 KM: The notion of geological time is also very present in recent projects, such as Rude Rocks shown this year at the Venice Biennale.

ED: The starting point for Rude Rocks was Borges’ short story Book of Sand, drawing on the idea of how infinity can undermine the understanding of objects, making it impossible to measure their limits in space and time. The installation includes a shelf-like structure displaying elements made of Breccia marble and copper. One side of the stone pieces is very flat and polished, they are clearly man made surfaces, but on the opposite side you see these rough volumes of rock that appear almost as outgrowths. It is as if they could offer clues to a geological history that nonetheless remains obscure or unreadable. One of these volumes, the only one that projects upwards, is placed within a translucent glass case, which gives it a hazy appearance and partially obscures it to the viewer. Although the work revolves around geological notions, I am not interested in being faithful to any scientific ideas and the end result is absolutely non-scientific. Other works in this series include a set of three columns made of the same material. These long vertical structures can be read as a kind of history of rock formation, at the same time as they convey a sense of geological time, whose magnitude is obviously much greater than human lifespan. 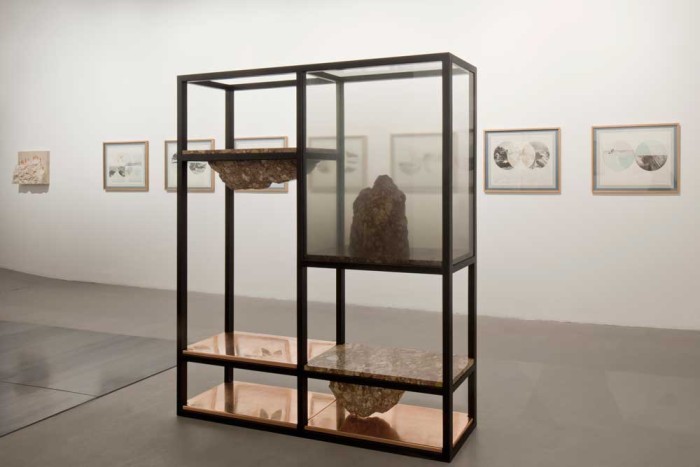 I also explored a similar idea in a new commission produced for the project Intemperie Sur at the MUAC, in Mexico City. Within the framework of this program, artists were invited to occupy a courtyard in the museum that had been formerly used for exhibitions but was deactivated for some time. So my project takes this idea of an interstitial space, a place of passage within the building, to create a spatial-temporal interlude. One of the pieces in this installation is formed by a series of vertical tubular structures made of travertine, where the interstices in the surface of the stone become apparent. A long crack which runs horizontally throughout the whole length of the piece reveals leaks or inconsistencies in the sedimentation process, suggesting the existence of a “lost time”, gaps that attest to the instability of this process.

KM: Finally, could you tell us a bit about the America’s Society commission you are working on at the moment?

ED: For this commission I am producing a site-specific installation for the elevator encasement of the atrium of the America’s Society building in New York City. The atrium already has lots of architectural features, so my idea was to follow the existing geometry and proportions already delineated in the space and use non intrusive materials retaining the integrity of the original building and its recent renovation rather than adding more visual information to an already busy space. My installation consists of building an encasement for the elevator encasement. In other words, I wrapped the existing encasement with prints on tempered glass, creating a new structure that is translucent. I’ve used three images that were found in the US Geological Survey database, which were then collaged together to form one image that overlaps with the previous construction. As the viewer enters the atrium, this image sort of fluctuates in space in the way that memory comes to us. For this project, I’ve chosen images of the Chimborazo, the highest peak in the Equator line, as a kind of meeting point for the Western hemisphere that reflects the Americas Society mission of bringing together artistic practices from that region. From an architectural viewpoint, the lift where the work is installed, is also a meeting point in the space of the atrium. Furthermore, rather than using images of the actual peak, I’ve selected photographs that document the journey to the top of the Chimborazo in 1946. I am also interested in how geographical lines, such as the Equator, where the mountain is located, are arbitrary constructs. So although the images allude to this specific point, they don’t strictly match this precise location. 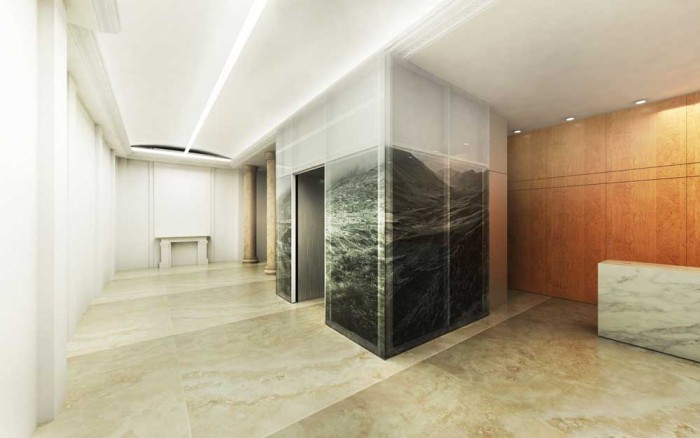 Kiki Mazzucchelli is an independent curator and writer working between London and São Paulo. Recent projects include the Solo Projects/ Latin America section at ARCO 2015 andThat Which Cannot be Repaired – Tonico Lemos Auad’s solo exhibition at Pivô (São Paulo). She is currently a member of the curatorial team of Sitelines – Site Santa Fe Biennial, launching in July 2016. 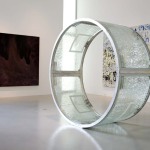 Another Name For Liar 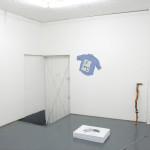 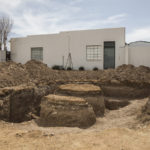 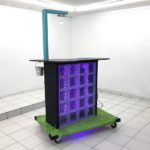