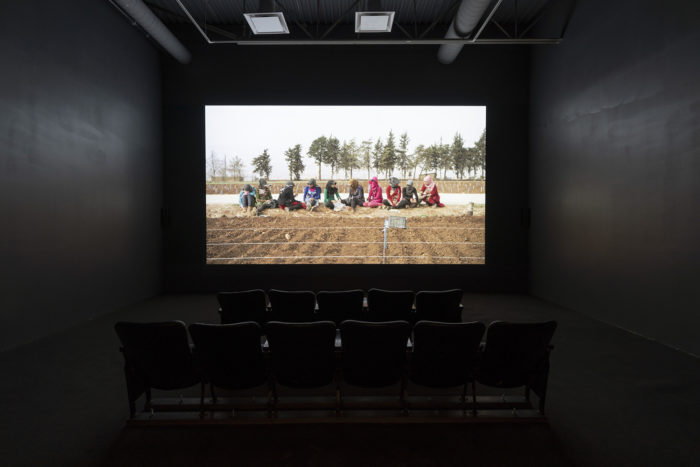 Any idea of a nation is capitalist since it bases its reason for being in continuous practices of dispossession and exploitation. The United States is a country which started to be formed from the assassination of Native peoples in the hands of the colonizers, necropolitics which continues to be a reality despite the constant amnesia caused by the hegemonic history. Santa Fe, specifically, was founded on the racist narrative by the last conquistador, Don Juan de Oñate, over lands that were taken away from the Native Americans Acoma Pueblo, through a gory battle, the Acoma Massacre. Upon seeking to defend their freedom in the face of the plans of the Spanish conquest, the vast majority of the Acoma were assassinated by a battalion of 70 men with a canon. The survivors were taken hostage to be enslaved under the command of Oñate, who also ordered that the right foot of every Acoma man be cut off, avoiding possible future rebellions. Oñate was sentenced for acts of cruelty by the Court of New Spain but was acquitted in the short term, which normally happens with all male criminals in a position of power in a heteropatriarchal system.

This chapter on the history of the United States, which is still a present scar on the memory and identity of the Acoma Pueblo, is revisited by the biennial SITElines curated by José Luis Blondet, Candice Hopkins and Ruba Katrib, with curatorial advice from Naomi Beckwith. With the title Casa Tomada, the 2018 edition seeks to reflect on the displacement, dispossession, and construction of history based on a parallelism between the mentioned historical fact and a short story by Julio Cortázar, the exhibition taking its name from this story. In the story, two bourgeois siblings are thrown out of their house without any resistance, by a ghostly strength which starts to take the rooms until they are left stranded in the street without any possessions besides what they have with them. Disorientated, they close the fence with the key and move away, for what one could suppose, to try to continue with their lives. Through the curatorial discourse, the short story evokes the sudden disorientation brought about by the dispossession in order to remind us that the perplexity caused by the violence—be it physical or symbolic—should not paralyze us. In the U.S. context of the Trump presidency, although it seems that everything is lost, one ought to resist in order to manage to be a counterweight to the power. 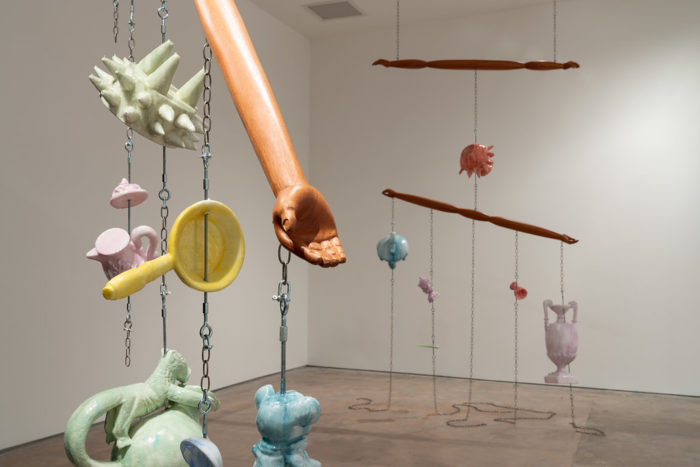 Without appealing to the revolutionary grandiloquence, the exhibition brings to the present the violent conquest carried out by Oñate based on a gesture of protest which occurred in 1997. In the context of the racist commemoration of the Acoma Massacre as the 400th anniversary of the first Spanish settlement in native American lands, the anonymous duo Friends of Acoma cut and stole the right foot of the monument which honours Oñate as a gesture of restoration of the memory which many seek to erase. Twenty years after that robbery which sparked many necessary conversations about how and who writes the history, the foot mysteriously reappeared through a documentary film by Chris Eyre, maintaining the mystery of its location and the identity of the avengers. In the exhibition, a replica of Oñate’s right food, accompanied by archival material surrounding the robbery and the film, subverts the problem of the phantom limb in order to address critically the absence of a recognition of the bodies in resistance as part of the democratic apparatus of the U.S.A.

From this, Casa Tomada displays a series of potent works among which some stand out, on the one hand, the photographic series Niñas (2018) by Paz Errázuris, the video Men Who Swallow Themselves in Mirrors (2017) by Sable Elyse Smith, and the feature film Wild Relatives (2018) by Jumana Manna because of its reflection on the subversion of spatial codes imposed systemically through criminalization and labour exploitation, from the quotidian and affective living of the oppressed bodies. On the other hand, the work of Eric-Paul Riege, Melissa Cody, Victoria Mamnguqsualuk, Lawrence Paul Yuxweluptun, Eduardo Navarro and Curtis Talwst Santiago stand out through the way in which their works seek to act, borrowing form the Zapatistas, “a world in which many worlds fit”. In this way, the above-mentioned artists seek to reveal other possible imaginaries that not only give visibility to the oppressed but also allow them to build a recognition of their histories, identities and legacies in reflection on the dystopian present. 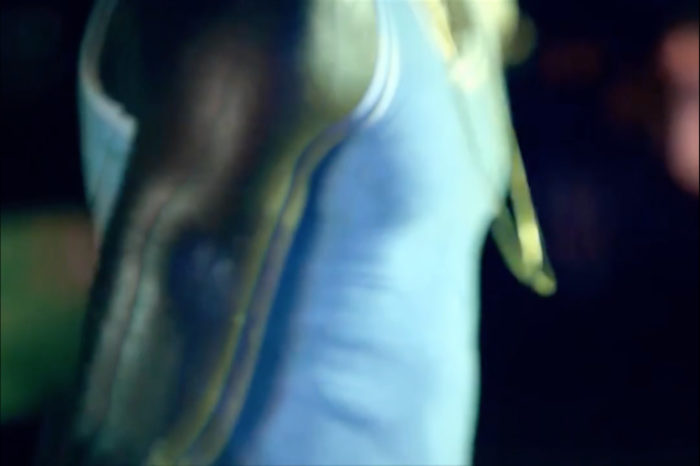 Nevertheless, in the specific context of this exhibition I couldn’t help wondering whether the visibility and denunciations function from the white cube. The relationship of the museums with colonized and racialized communities must be reformulated from the South. In contexts such as Santa Fe, the museums represent the display of the dispossession in order to reaffirm the power of the colonizer.  One can start to reflect on this from a very clear example: the refurbishment of the SITE Santa Fe museum in charge of the architecture firm Shop Architects. The new building of the museum contrasts drastically with the traditional adobe architecture based on the stepped and perforated metallic facade, which according to the architects, seeks to create a dialogue with the Railyard park and the train lines found along it. To endeavour to dialogue with the machine that perpetuated the colonization through industrialization seems to me to be an ironical and insensitive decision on the part of the museum.

Is the museum in this case the best tool to articulate a decolonizing discourse? To whom is the exhibition aimed? During my short stay in Santa Fe I observed something in particular regarding the bodies who inhabited the town: the large majority were white tourists. I confirmed in this way that these lands no longer belonged to the Acoma Pueblo community; they were displaced in order to create an illusion which exploits the native identity, from the visual and architectural aspect, based on an exoticization in order to attract the touristic gaze. The exhibition seeks to appeal to the white tourist that neo-colonizes with their selfies taken in a square, whose centre has a monument which commemorates murderers, or it tries to enable a healing and reconciliation with the displaced community? Who does that imposing building make feel welcome? In this case, is art trapped in the paradox of the politically correct upon trying both? Having found myself in an inaugural event where the large majority were rich white people that support the museum and the biennial, the event, from the internal structure of the museum, was revealed to me as an attempt at expiating their guilts. There is an oligarchy that feels an enormous embarrassment of the piece-of-shit president who came to power due to the political parties that this same oligarchy backed up. According to the facts supplied about the museum by Andra Fraser in her investigation Museums, Money, and Politics—whose graphics covered the wall which opened the exhibition, 88% of the raised funds by SITE Sante Fe in 2016 had links with the Republican party. 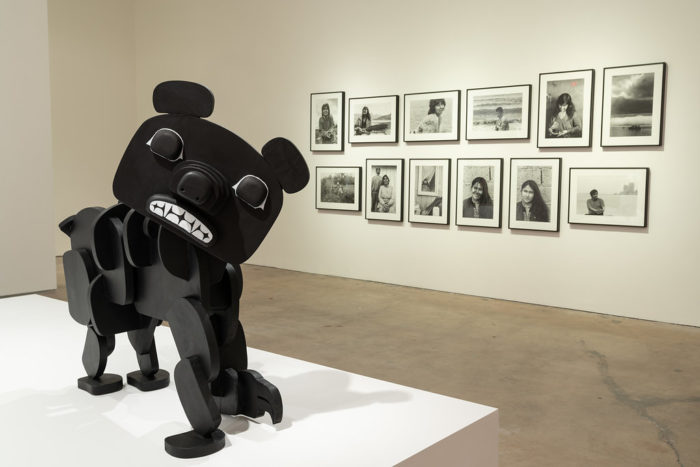 The visual languages of contemporary art, although they have been reinvented, are, in essence, Western. Therefore, these languages are a form of neo-colonization: in order to visibilize in this world we must adopt their codes, medias, forms, symbols, metaphors, dialects, discourses. One must question if the esthetical, symbolic, and discursive strength of the artists that seek to move away and question the cis-heteropatriarchal and racist Western genealogies function within the same models and structures that for such a long time have ignored and rendered them invisible. Paraphrasing Brigitte Vasallo, an activist, writer and feminist theorist, the tools of the master serve to knock down the house of the master only if after the demolition something different is constructed. “If we want to restructure the system, we must find new tools.”